So, You Want to Vote on Worldcon Location? Yay!

Worldcon is historically kinda bad at getting the vote out on site selection (aka “voting on where Worldcon will be in the future”).  Last year, there were 6130 total members of LoneStarCon3.  Of these, 1348 members voted on site selection, or not quite 22% of the membership.  And that was a highly contested race!

I don’t think low voter turnout is the intended outcome, but I do think Worldcon voting isn’t the easiest system to understand.  Worldcon is a big endeavor, and big things are unwieldy, and site selection voting hasn’t often made it to the top of the list of things to make sure the public is knowledgeable about.  Plus, according to the Sasquan report I read last month, the previous five Worldcon races were uncontested.  Maybe it’s pretty understandable that it wasn’t a huge focus in the past.  I think I was on Worldcon staff for at least two years before I knew we could vote on Worldcon location.

But this is how we decide where Worldcon will be!  Which has a huge impact on the con in the long term (more on that later)!  And it’s the least expensive option for getting a membership to Worldcon!  So I’m going to attempt to explain it. 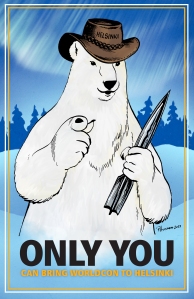 After losing Worldcon 2015 by only 35 votes, I truly believe that only YOU can bring Worldcon to Helsinki! You, and many others voting with us …

The first thing you need to vote on Worldcon location is a membership to the Worldcon two years prior to the year you want to vote on.  It can be a Supporting (aka non-attending) membership, or an Attending membership.  But it’s required before you can go further on voting.  I cannot stress the two years prior part enough — having a membership to Loncon3 for summer of 2014 won’t allow you to vote on Helsinki for 2017, sadly, because it’s the wrong year. (You can vote for Kansas City in 2016 or Beijing in 2016 this year, though.)

You can get your Worldcon membership a couple of different ways, but if this is your first time, I’d suggest purchasing online.  The membership prices periodically increase, so you don’t want to wait long if you’re sure you want a membership. If you are at a convention in person, and if the Worldcon has a presence there, you can also usually purchase membership at their fan table (basically, a table where fan-organized groups talk about their conventions, activities, etc.).  Sometimes that comes with an at-con discount, sometimes not.  Online, though, the Worldcon website should have a “Membership” or “Registration” tab that will get you where you need to go.

The Hugo Awards are the premier fan-selected awards in science fiction and fantasy.  All Supporting and Attending memberships come with Hugo nomination and voting rights.  If you get your membership early enough (by Jan 31st of the relevant year, as I was told by Sasquan staff), you can nominate works for the Hugos to the year prior, the year of, and the year after your membership.  So if you have a membership to Sasquan, the 2015 Worldcon, and if you got it early enough, you could nominate works for the 2014, 2015, and 2016 Hugo ballots.  You also get to vote on the final nominated ballot for the year of your membership.  For members of Sasquan, we will get to vote on the Hugo Award nominees next summer, and help select the winners.  The Hugos are a huge thing unto themselves, and something I love, but that’s not the point of this post, so I’m going to leave it at that for now.

The next step may involve some waiting, depending on what year you want to vote on.  Please don’t give up!  We want your voice to be heard!  (Or at least, I do!)

At some point around June or July, the Worldcon coming up (“the seated Worldcon”) will publish a ballot for the site options being voted on at the con.  This is also the point at which the con will tell people how to pay their site selection fee in order to vote.  The fee amount is frustratingly different every year, but for somewhat understandable reasons.  This fee turns into a supporting membership for whichever bid wins the convention, and therefore the bids in question are required to agree on what the fee amount will be.  If they can’t agree together, there’s a formula to which it reverts, according to the World Science Fiction Society (WSFS) constitution:  “If agreement is not reached, the default fee shall be the median (middle value) of the US dollar fees used in the previous three (3) Worldcon site selections.”  Generally, this fee has ranged from $30 to $70, I think, recently.  There was a bit of politicking (which I personally thought was bullsh*t) last year about trying to make it higher, but we prevailed with $40 to vote on the 2015 Worldcon, which meant more fans could afford to vote.  All site selection fees paid are given to the winning bid as seed money to start working on their convention.

So you need to pay a fee in order to vote on Worldcon site selection, but “fee” is possibly a misleading word.  It turns into a Supporting membership of whichever bid wins.  This is the absolute cheapest way to become a Worldcon member, and the bid that wins is required to offer an upgrade fee for those who voted and want to change their membership from Supporting to Attending.  The exact fee for upgrading is up to the convention; the WSFS constitution only requires that “this fee must not exceed four (4) times the site-selection fee and
must not exceed the difference between the site-selection fee and the fee for new attending members.”  Hence, cheapest option for membership, whether you want a Supporting or Attending one.

(You can see how this becomes a self-perpetuating cycle for some fans — membership plus voting on site selection turns into having a membership every other year, at the least expensive rate possible.  Maybe that’s okay, but you have to know about it to take advantage of it, which means new fans are hugely disadvantaged, here.  That’s also probably a different post unto itself, particularly as I have some ideas on how it could/should be mitigated.  But I do acknowledge it, and part of the point of this post is to help fix that if I can.)

Filling Out the Ballot

So!  Once you’ve got your membership, and you’ve paid your site selection fee (which hopefully the convention has allowed you to do online), you get to fill out a ballot!  We’ve not yet had a site selection ballot be available electronically, but I’m hoping that’ll change for voting on the 2017 bids.  Regardless, a paid site selection fee means you’ll at least be able to download and fill out a paper copy, which can then be mailed to the convention or sent with someone you trust who is themselves attending the convention, if you can’t be there.  Your ballot needs to be received well in advance of the con if you’re mailing it, so be sure to check the website for deadlines on this.  (For example, site selection ballots last year had to be received by August 15th if mailed, or presented on site at LoneStarCon3 by 6 pm on August 31st.)  At con, site selection hours will be posted, and all ballots must be cast by the day and time publicized.  This is usually 6 pm on the evening of the Masquerade event, so the results can be announced during the WSFS Business Meeting the next morning.

The ballot for site selection, as with the Hugo ballot, utilizes an instant runoff voting system, also sometimes called the Australian system for preferential voting.  This means that you vote for your top choice as number 1, your next favorite choice as number 2, and so on.  When ballots are being tallied, first they’ll count number 1 choices.  If there’s a majority (over 50%) vote allocation at that point, we’ve chosen a Worldcon location and everyone can get to the partying part of the evening.  If there isn’t yet a majority, the least popular site for number 1 votes will have their ballots reallocated to number 2 choices, and we’ll see if that gives someone a majority.  This goes on until ballots reallocated give someone more than 50% of the ballots (as with last year, when Spokane won by 35 votes over Helsinki in the third round of voting — prior to that, Helsinki won the first two rounds, but didn’t have a majority yet).  If there’s never a majority, or if “None of the Above” wins more than 50% of the votes, there is mass mayhem and hysteria.  Also possibly recounting and gnashing of teeth.  That’s never happened, though, and the statistical likelihood is infinitesimally small.  Hopefully we will avert disaster and proclaim a winner, instead!

For a video explanation of the instant runoff vote, take a look at the video our team produced last year:

So in order to vote for Helsinki’s 2017 Worldcon bid:

Past Worldcon locations continue to have an impact, coloring the conventions for years to come, so I think voting on location is an important thing to do, particularly in such a highly contested race as we’re currently in.

Note: This post has been translated into the following additional languages (and I will update this list as appropriate) …

20 responses to “So, You Want to Vote on Worldcon Location? Yay!”